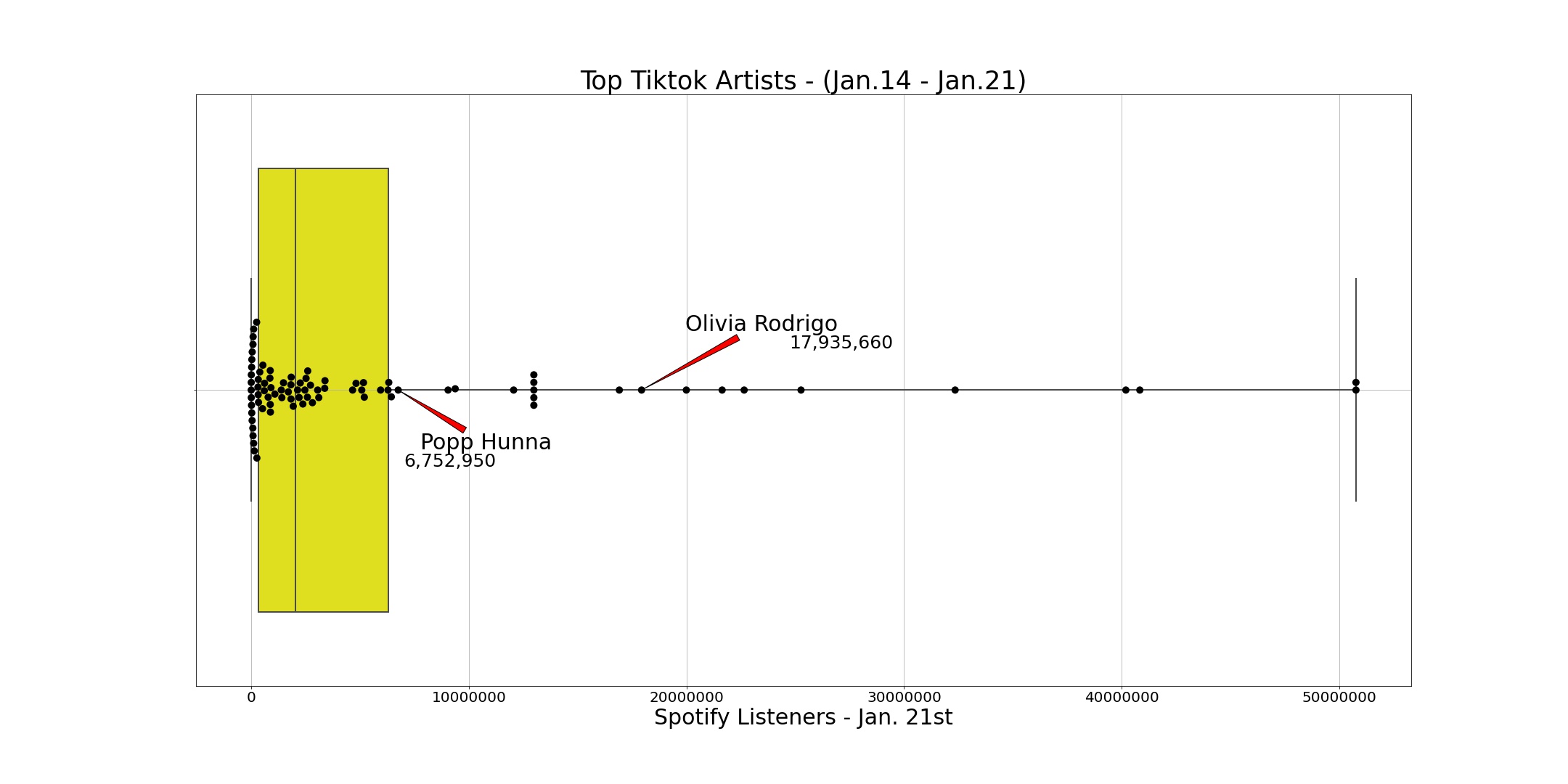 In my previous blog post, we learned why it’s important to focus your attention outside the box in order to identify talented artists who don’t quite fit the industry standard. We used boxplots, a statistics graphing method, to allow us to easily spot those outliers. The results ended up confirming that Olivia Rodrigo is an outlier in terms of audience growth, measured by Spotify listeners.

But how did Rodrigo’s fanbase grow so rapidally to extraordinary numbers? It’s widely accepted in the music industry that having a small but loyal army of listeners is what allows emerging artists to “break-through”. In fact, Zoe Scaman does a superb job of explaining the critical role that Fandoms play as “the new dominant cultural and commercial currency.” In other words, Olivia Rodrigo’s launch to fame could be attributed to her massive fanbase of evangelical followers.

But just how massive is her fanbase, and how do they compare to those of her contemporaries?

The rest of the article with examine Rodigo’s audience across 3 popular social media platforms, and we’ll use some visuals to help us identify where her data stands relative to the rest of the observations in the dataset. If you’d like a detailed description of each variable that I’m using or want to see my source code, feel free to checkout my Github repository.

The data set that I’m analyzing consists of the top 100 trending audio tracks for the week of January 21st, which aggregates data for the previous 7 days. After filtering the data down to only tracks with isrc’s, I ended up with 87 unique records. For each artist, I collected the number of followers across 3 popular platforms (Twitter, Instagram, Tiktok) for two dates: January 21st and December 31st so that I can compare the differences between a week before and a week after Olivia Rodrigo’s release of Drivers License.

Looking at the boxplot distributution of Twitter followers before and after Tiktok, we learn that Olivia’s fanbase is average at best. The median number of followers on December 31st is 21,915 and the average is 1,496,840 (the outliers is what’s distorting the average number so median is the best measurement to capture the majority of our data). Even though Olivia’s 127,746 fans on Twitter is more than the median, she still falls within 1 standard deviation on a normalized distribtuion.

Standard deviation is a measurement of dispersion that indicates variation of a set of values.

After the observation week, Rodrigo increases her Twitter fanbase by 270% to nearly 500k, which is still within the interquartile range (IQR) and not significantly better than the rest of the artists in the set. However it is worth noting she is the only artist in the group to increase followers by more than 50%.

Data from Instagram provides more useful insights that explain where many of Olivia’s fans spend their time. On December 31st, 9 days before the release of Drivers License, she has 2,361,247 followers which is right on the cuff of the upper quartile (75th percentile), which is 2,678,490. Technically, she is still in within the IQR, but with just a nudge, she can propel herself to the top 25% of artists. A week after her big release is just what Olivia Rodrigo needed to make herself standout from the rest of the pack. By January 21st, her fanbase increases by 111%, doubling the number of followers again but on a completely different platform. This time, however, the latter value deviates enough from the middle 50% that she is now in the top 25% of artists for number of Instagram followers.

We see a similar pattern with data from Tiktok. December 31st, Olivia has 1.4 million followers, which is just a hair above the 75th percentile (+75k) for the rest of the data points. Leveraging the power of Tiktok’s viral-hit machine, her fanbase increases by 197% to 4.1 million followers on January 21st.

In my next post, I will investigate the following questions. What social platforms have the strongest relationship with streaming activity? Does it matter for an artist if they don’t have a Tiktok account? What matters more: being on Tiktok, Instagram, Twitter, or all 3?Hope you all enjoyed this article. Feel free to comment with any ideas that my research might have ignited in your head.

Did you find this article helpful? Submit your name and email, and get weekly insights delivered straight to you inbox!