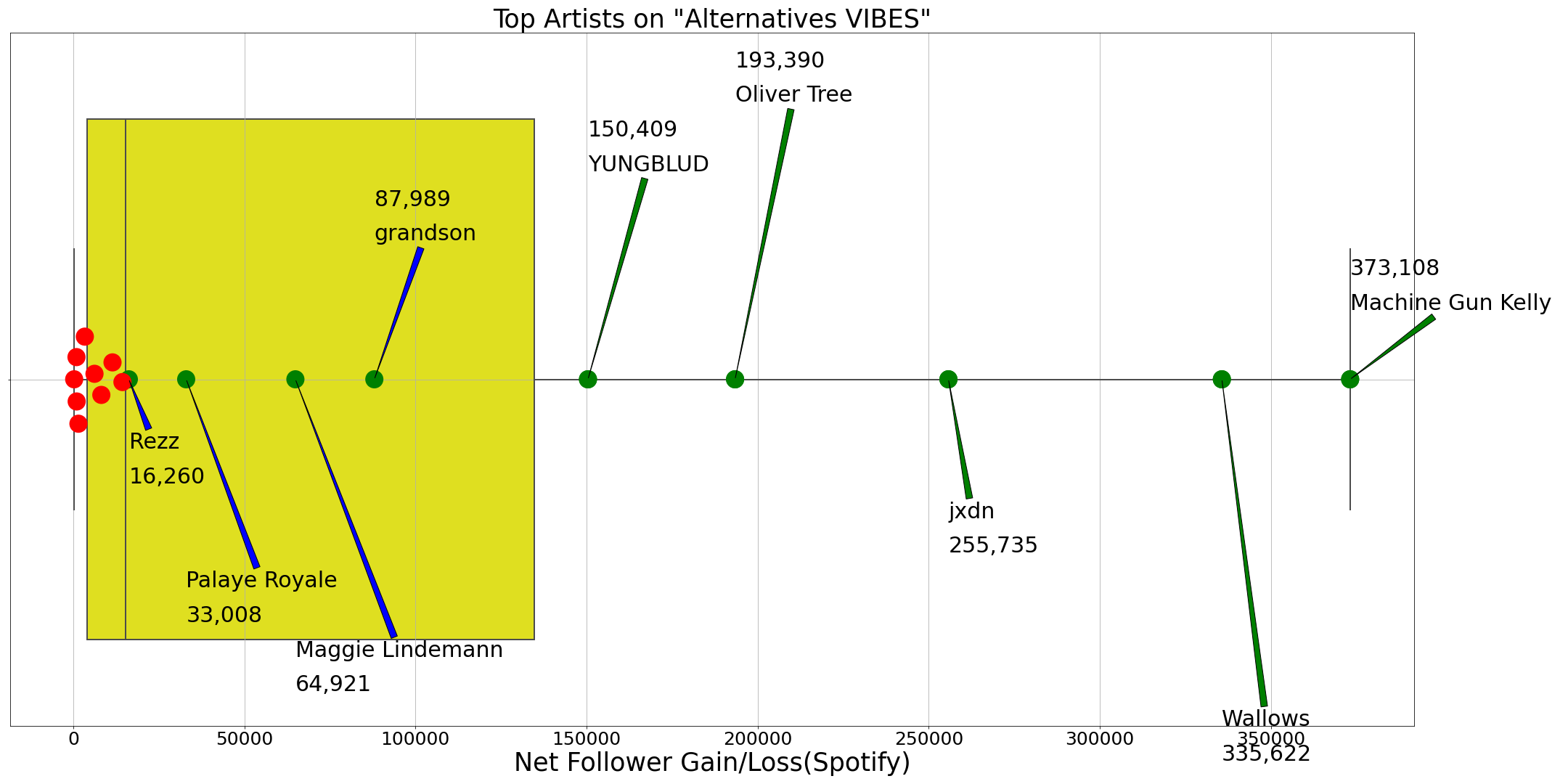 In my last article, I teamed up with Neil Cartwright (The Artist Network) to explore the artist growth funnel and analyze the relationship between an artist’s Spotify followers and their social channels. Using historic tracks from the Alternative VIBES playlist as our sample, we found that the number of pre-playlist Instagram followers has the strongest relationship with an artist’s growth on Spotify. However, the biggest winners, in terms of net follower gain, all had an official presence on Tiktok. Coincidence?The question that we’ll zero in on revolves around the 18 artists (represented by green dots above) who are active on Tiktok. Obviously being active on the video-sharing app won’t necessarily help artists acquire new fans; so in an attempt to identify other factors that would facilitate fan growth, we’ll spend the rest of the article exploring the distribution of two variables:

The boxplot below measures the distribution of each artist’s engagement, which can help us spotlight which artists have the most passionate followers. As we see, half of the 8 top performers have engagement numbers above the median (7 likes per follower); the other 4 are below the median. This insights tells us that having a passionate fanbase doesn’t necessarily yield above-average fan growth. For instance, peppy, indie-rock band The Happy Fits have much higher engagement than Machine Gun Kelly (14 likes/follower vs. 2). On the other hand, Machine Gun Kelly, Wallows, YUNGBLUD, and grandson are arguably much more established acts who have already experienced the mainstream a year prior. In 2019, MGK and YUNGBLUD have both been bolsted by collaborations with Travis Barker of Blink-182 and Dan Reynolds of Imagine Dragons. Maggie Lindemann, who also has an affiliation with Travis Barker, is a dark, pop punk queen who became Tiktok famous when her song “Pretty Girl” was remixed and transmormed into another dance challenge of 2020. There are actually 3 remixes of this song: Cheat Codes X Cade, Taylor Wise, ye. Remix). Jersey band The Happy Fits, however, feels a bit too old-school for modern rock these days; I think the lack of hip-hop and electronic elements is what’s keeping them from broadening their horizon and going beyond their loyal fanbase. Plus I’m not feeling the anger that’s channeled through modern rock bands like grandson and YUNGBLUD…they’re too, shall I dare say it, Happy?

The visualization below depicts the distribution of Total Spotify Reach. This metric is calculated by adding up the followers of other playlists that a record is placed on during its lifetime on Altnerative VIBES. Oliver Tree and Palaye Royale have a total reach of 1 million and 900k, respectively, which are both below the median value (1.7 million). The other 6 artists are above the median. Naturally, having greater listener exposure would lead to increased fan growth.Oliver Tree, whom you may recognize on Tiktok as the neon, jumpsuit-wearing bowl-cut crashing his scooter for comedy. Although Tree released his first ep independently in 2010, he took a long hiatus until his return to music in 2016. Tree signed to Atlantic Records shortly after his release of When I’m Down in 2020 and released his first full-album, Ugly Is Beautiful. I think Oliver Tree’s career is just getting started and will soon be seen on more playlists, extending his reach even more. In fact, his latest release in February, Out of Ordinary, has a Total Spotify Reach of 2.7 million at the time of this article’s publication.Canadian-Amaerican rock band Payale Royale is a more traditional sounding rock band, not as happy as The Happy Fits but still lacks the blend of more popular genres such as pop, hip-hop, and electronic music. This homogenous sound seems to be enforcing the trend of mainstream pop music becoming “genre-less”. The most successul artists today are able to be more chameleon-like in their music…Thank you, Internet!!!

The scatterplot below is another example that reveals the strength of these two variables. Reach and follower gain have a pearson’s correlation coefficient of .83, which is very strong.

Rock isn’t dead, it’s just been resurrected as a younger, more technically-savvy punk that doesnt care about the status quo. The most successful rock bands today aren’t afraid of computers taking their jobs. Grandson, YUNGBLUD, and Machine Gun Kelly are just a handful of examples who prove you can use real instruments and electronic beeps and bops in the same waveform. If you’re a rock band today looking to “make it” in the industry, consider these steps to increase your chances of growing your audience beyond your base.

Did you find this article helpful? Submit your name and email, and get weekly insights delivered straight to you inbox!